Structured light 3D imaging systems have inherent tradeoffs balancing the precision of the 3D scan against its acquisition time. For instance, certain structured light techniques achieve high depth resolution by projecting multiple patterns but require long acquisition times. At the other extreme, some techniques project a single pattern, facilitating high speed but result in loss of detail. Such tradeoffs are exacerbated when operating in challenging regimes with low signal-to-noise ratios arising from either low-albedo objects, dynamic scenes, or strong ambient illumination.

In this work, we leverage Single Photon Avalanche Diode (SPAD) arrays, an emerging class of single-photon imaging sensors, to enable 3D scanning at high-frame rates and low-light levels. This technique, called Single-Photon Structured Light, works by sensing binary images that indicates the presence or absence of photon arrivals during each exposure. We use the SPAD array in conjunction with a high-speed binary projector, with both devices operated at speeds as high as 20 kHz. The acquired binary images are heavily influenced by photon noise and are easily corrupted by ambient sources of light. To address this, we develop novel temporal sequences using error correction codes that are designed to be robust to short-range effects like projector and camera defocus.

Our lab prototype is capable of 3D imaging in challenging scenarios involving objects with extremely low albedo or undergoing fast motion, as well as scenes under strong ambient illumination.

The enabling technologies behind Single-Photon SL are single-photon cameras (e.g. SPAD arrays) and digital micromirror devices (DMD). We operate both devices at speeds as high as 20,000 Hz. 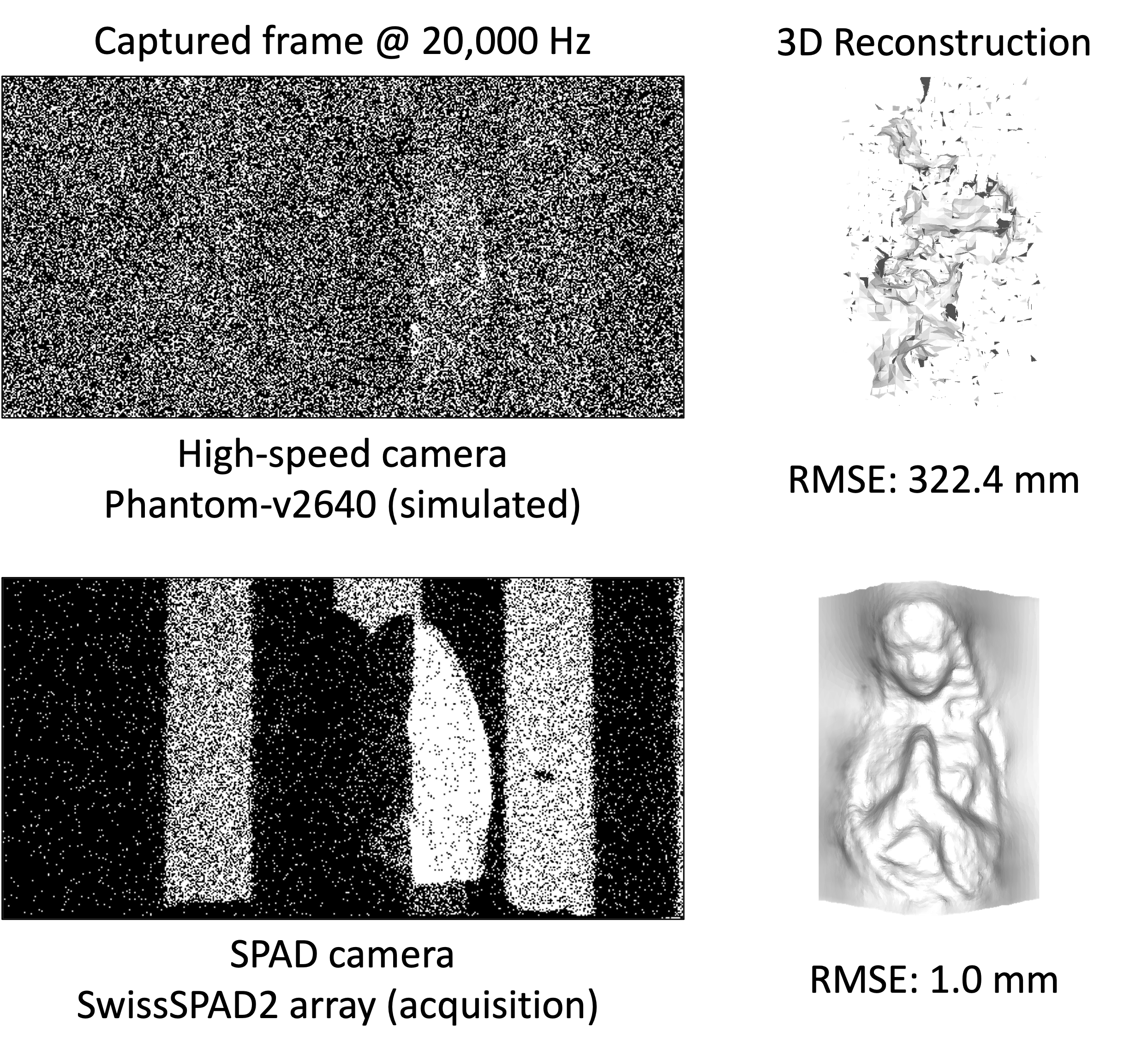 The Curse of Read Noise

Notably, when operating at such extreme speeds, read noise becomes an important consideration. Even the read noise floor of state-of-the-art high-speed cameras result in imperceptible signals.

Unlike existing high-speed cameras, single-photon cameras such as SPADs directly detect the arrival of photons and are not corrupted by read noise. 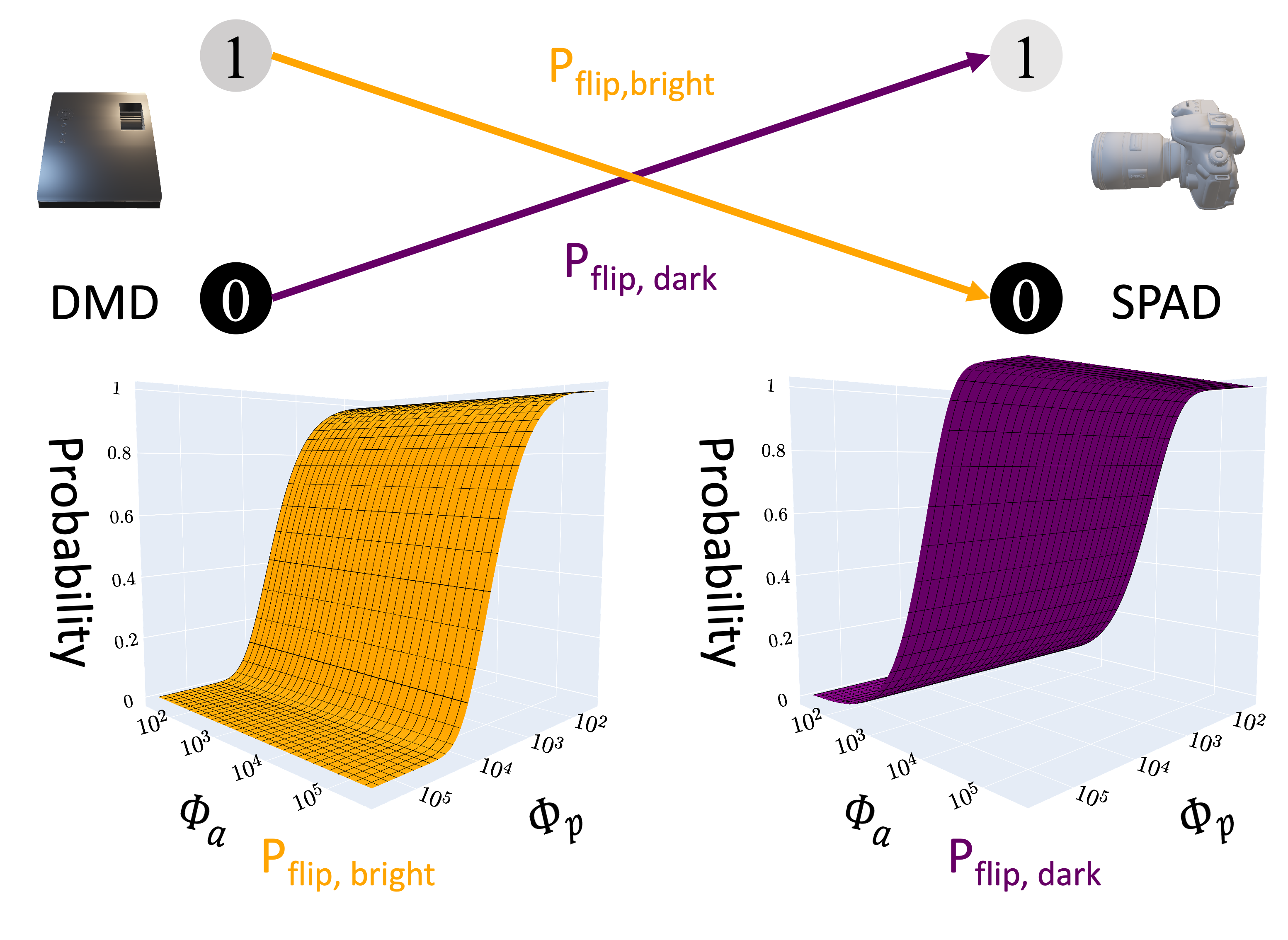 Since SPAD sensors have no read-noise, the predominant source of noise is the random arrival of photons, called photon noise. 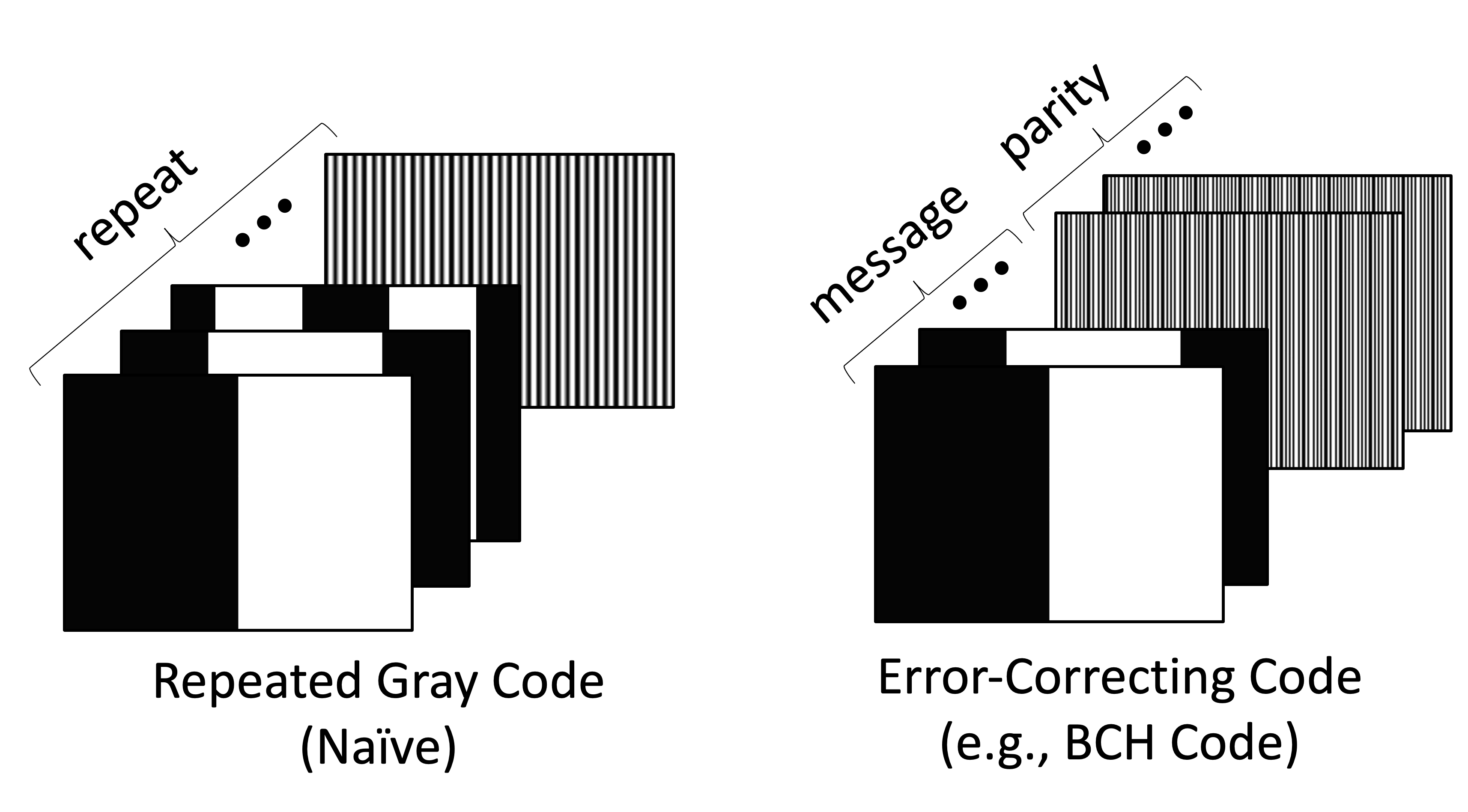 A naïve strategy to mitigate photon noise is to simply repeat projected patterns and perform a majority vote.

A more robust and principled strategy is to append parity patterns which can be used to correct errors that arise from bit-flips. Such parity patterns are derived using binary error-correcting codes such as the BCH codes. 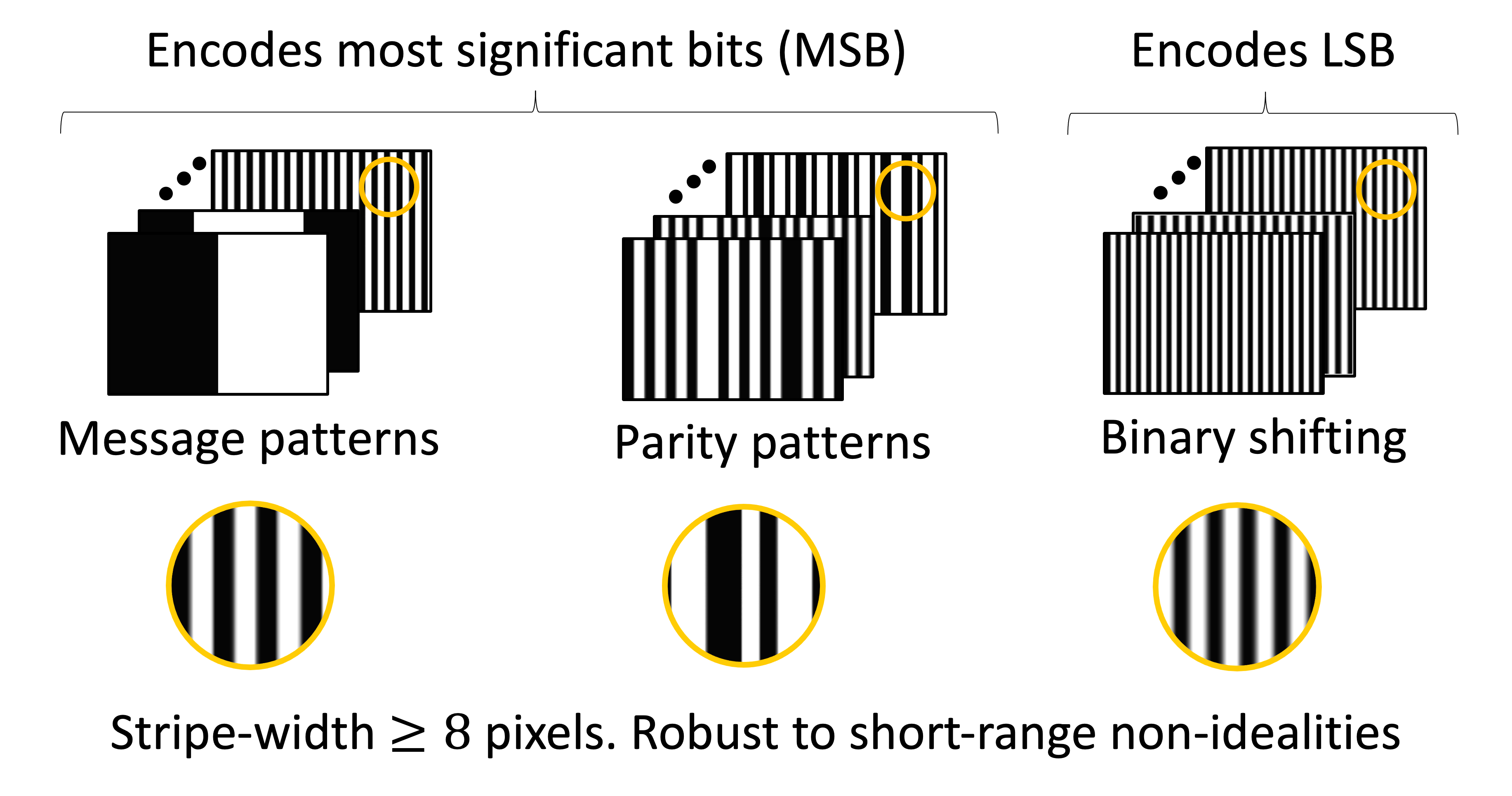 Unfortunately, a majority of the parity patterns feature high-spatial frequency. These can be easily distorted by non-idealities that commonly occur in practical SL systems such as projector and camera defocus, and dramatic resolution mismatch between the two devices.

To provide robustness to these 'short-range effects', we devise novel hierarchical codes using a combination of error correction and binary shifting. 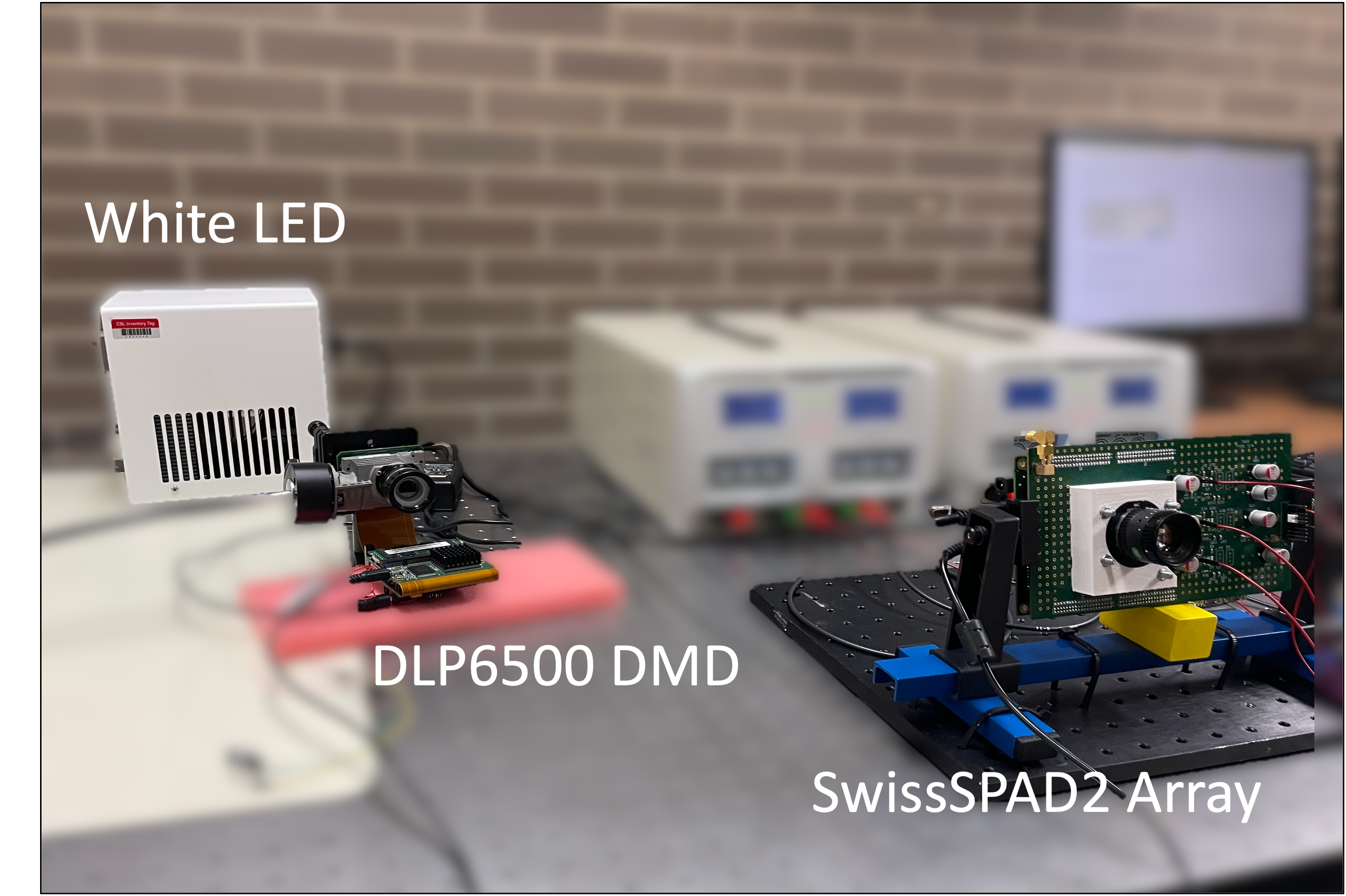 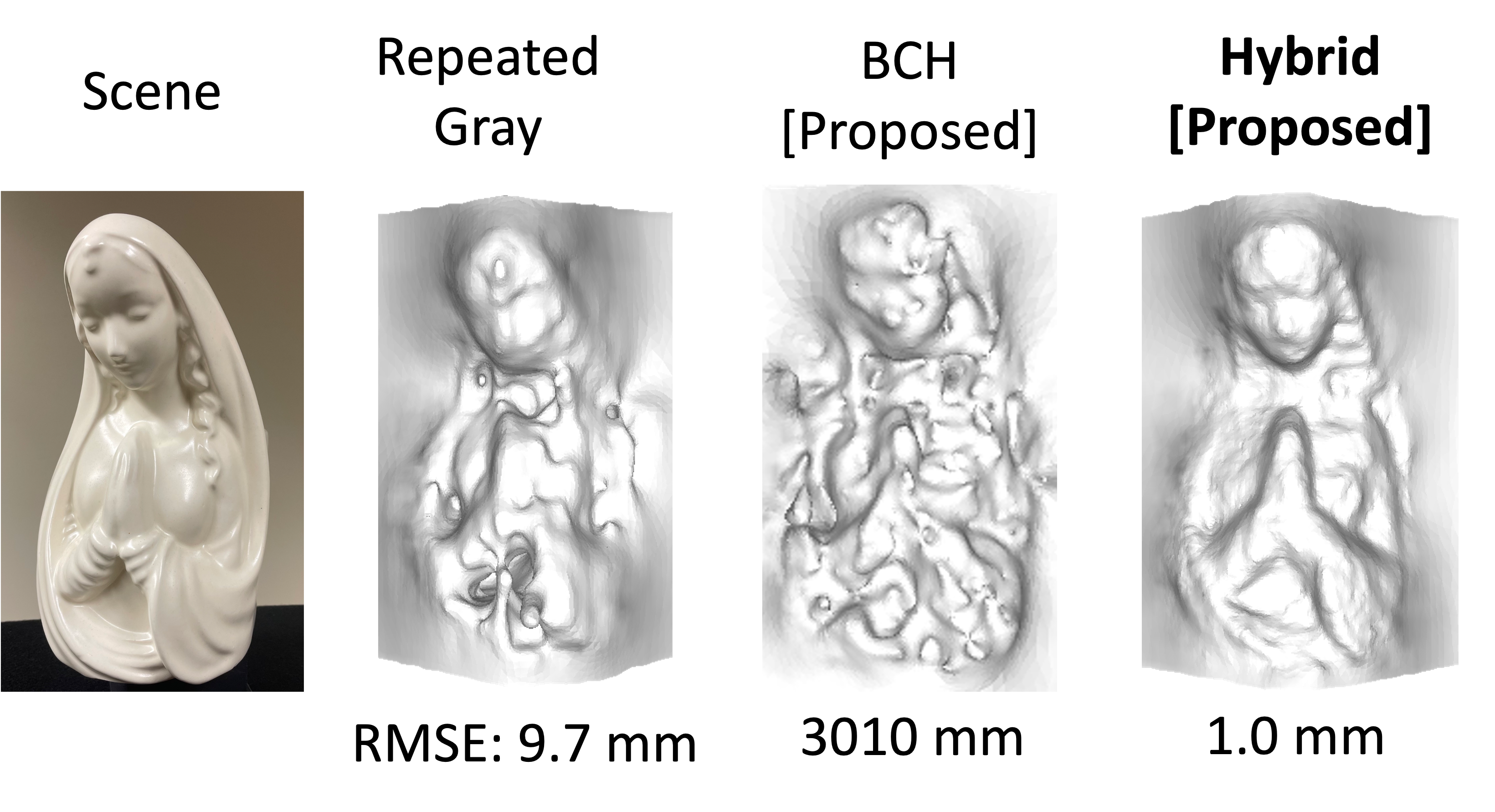 We validate the effectiveness of the proposed coding schemes by first considering static scenes, for which groundtruth measurements can be obtained.

The proposed hybrid strategy, robust to both photon noise and short-range effects, is considerably more consistent and accurate than both naïve and BCH strategies.

Given a fixed acquisition time and power requirement, low-albedo objects are often a challenge for structured light systems as they return only a small fraction of incident photons.

As an extreme example, we also show that Single-Photon SL can recover the exact 3D geometry of objects covered with very low-albedo materials.

Shown here is an inverted V-groove covered by Acktar Metal velvet, which returns just 0.1% of incident illumination. Evidently, the highly absorptive nature of this material makes it difficult to perceive depth from the reference image alone.

Capturing a dynamic non-rigid object, such as a white cloth rapidly waved in front of the camera, requires high-speed acquisition. Otherwise, excessive motion blur is induced.

Another scene with extremely fast motion--a jack-in-the-box toy which springs up in less than 40 milliseconds.

A conventional depth sensor such as the Kinect operates at 30 FPS and is too slow to recover depth at intermediate instants.

However, Single-Photon SL can run at a significantly faster 2000 FPS and recovers finer-details of the toy as it springs up, such as its ears. 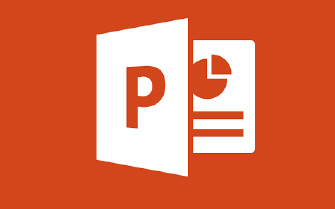 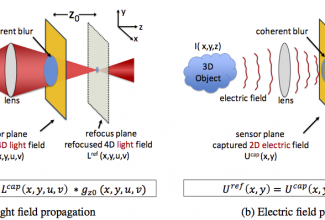 Light field cameras allow us to digitally refocus a photograph after the time of capture…. 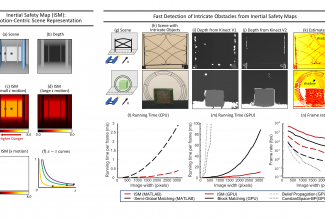 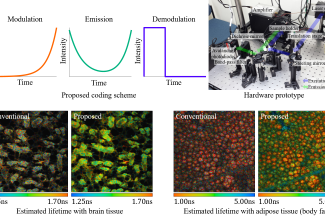